I have been getting a lot of mileage out of old number 38, the first Punch tenor.  The box is a good size, it sounds pretty good, it is a nice size.  So I went back to the smoke shop and asked if they had another of those boxes.  Took them a while to get one empty (something about cigars not selling as well.  A health risk, apparently.  Who knew?), but finally one came free and they called me.  About that time I found out that an old friend named Lance from New York had a connection to Pete Seeger and said that if I could get a box over there that Pete would sign it for me.  Holy jeebers.  Thanks to the USPS and Lance I ended up with a cigar box with Pete's autograph  so clearly had to make another tenor.


This one has been an interesting process.  Not only is it more fraught for me because I damn well better not screw it up, it is the first time I am building something I have built before, with the possibility of building it better.

For a neck I got out some black locust that had been a tree in our backyard.  We took it down a couple of years ago and I had some of it sawn into lumber.  It is about ready to use, so I took a chunk of that.  I have never use black locust before, it is kind of stringy with an open grain.  Looks an awful lot like red oak, actually.  For a bridge I used a scrap of Corian, a countertop material.  I got that idea from my friend Steve Wishnevsky. He told me that Corian transfers the sound to the tone wood better than a lot of woods, so I have been using that.

All in all, it came out pretty well.  I have a new favorite instrument.  And if anyone wants the first Punch tenor (the one that is linked above) drop me a line.  I'm looking to sell it to a good home.  I can't play two of them.

It being autographed by Pete Seeger, I had to have the first song be a Seeger tune. 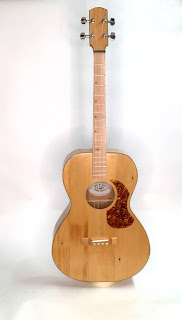 I had this really nice, straight-grained piece of Long Leaf Pine sitting around, and I have been wondering what an instrument made out of that would sound like.  So here it is.  Spruce top, of course, from a piano sound board, but the rest came from an old beam that was removed during some construction here a few years ago in a century-old building. I bound the headstock, which I think makes it look a little more finished, and just for fun I offset the fret markers, which just makes it a little more quirky.  The binding is tortoiseshell, which looks good with the long leaf pine, so I got some tortoiseshell dots to match.  The fingerboard is dogwood from my folks land in North Carolina. It is pretty loud for such a little guitar, with a very present high end.  Here is a little recording: 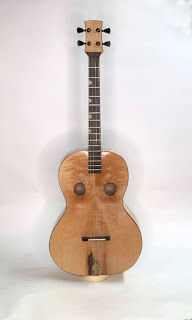 Early in the summer a friend who is a very skilled furniture maker strolled by and said he was working on a table made out of some seriously flamed maple, and had some off cuts, and asked if I wanted them. Of course I did. "Flame" is a figure that happens in a tree that runs perpendicular to the grain of the wood.  It catches the light in ways that can be stunning, it is used on fiddles to make the backs and necks really shine, so it is often referred to as "fiddleback" maple.  The four pieces he dropped off were just barely enough to make a (very) small bodied tenor.  One of them had a knot hole in it, which in a piece of furniture is often completely useless.  A knot can't be used where a joint is put in a piece of furniture, and is usually seen as a flaw. Then again, on an instrument you need a hole to release the sound.  So it made sense to resaw and bookmatch that piece for the top.  The end result was a grain and figure pattern that was visually striking 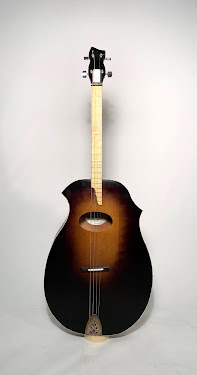 Some time ago I saw a link on the web site for Bernunzio's Uptown Music in Rochester. It was for a 1930's "Venetian" style tenor from Kay Kraft and it just made my heart stop, it's so good-looking. So I thought I would make one.   This is a whole different body style, and required completely starting over, to a certain extent. The original is not an archtop, though it wants to look like one. Instead of actually carving an archtop, though, the makers just put a wicked curve in the braces and bent the top onto them. Still solid spruce, but not carved. This allowed for the floating bridge and tailpiece. So that's what I did. Because I had never built a guitar like this before, the first one came out pretty bad. Here it is, all built out of poplar. I learned a lot on this one, not least that it is really hard to figure out what is "symmetrical" on this body shape. You can see that this body is kind of wonky, and that the lower bout is just